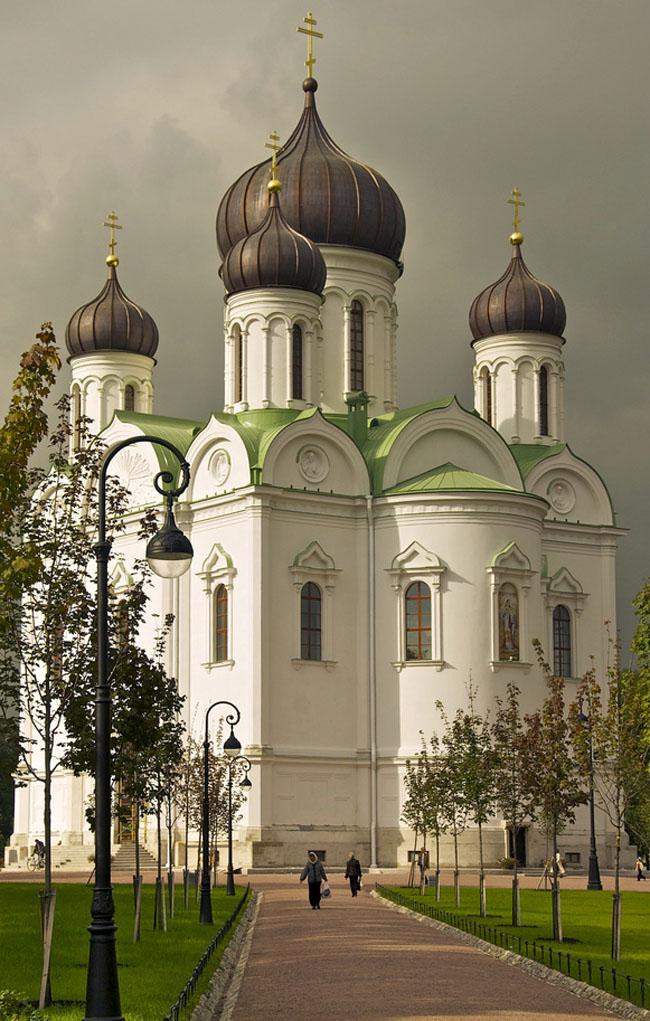 2012 update to the page!  The Church has been rebuilt and is now open for worship.  How pleased Kuchumov would have been to have lived to have seen this.  The church looks fantastic and Lenin is gone.

You can read a full article with pictures and video on Royal Russia News.

This enormous church stood in the center of Tsarskoe Selo surrounded by a park. It was built in 1835-40 by architect, Konstantin Ton, and is a much reduced, loose copy of his Temple of Christ the Savior in Moscow. Many of the same artists who worked on the great Temple also created decoration for the Catherine Cathedral.

To the horror of the people of Pushkin (Tsarskoe Selo) and those in charge of the preservation of historic and artistic monuments, the church was destroyed on orders of the Bolshevik Government in the 1930's. In its place a monument to Lenin was erected.

This barbarious act was made worse by the fact that many of the paintings and furnishings of the church - including exquisite works by the artist, Bruni, where blown up when the church was dynamited. Kuchumov, the former curator of the Alexander Palace Museum persoanlly saved a painting of the Last Supper by Bruni at the last minute by offering a bottle of vodka to one of the demolition crew in exchange for it.

Virgin and Child in the Apse of Hagia Sophia

Here's a page dedicated to this famous mosaic in the apse sem-dome of the great cathedral church of old Byzantium.  It dates from the original redecoration of the church after iconoclasm ended.

These amazing drawings prove that the mosaics of Hagia Sophia were uncovered for almost 300 years after the conquest. Millions of Muslim worshippers prayed under Christ, the Virgin and the Seraphim.