Yekaterinburg, April 30, Interfax - The fire has been extinguished in the Ganina Yama area in Yekaterinburg, where the remains of the family of Russia's last tsar Nicholas II were found.

The area caught fire on Wednesday morning. The churches located on the territory of the near-by monastery were not damaged.

Firefighters are currently clearing the debris, a spokesman for the Russian Emergency Situations Ministry's department for the Sverdlovsk region told Interfax.

"There are no casualties. Thanks to the actions taken by the firefighters, the nearby wooden buildings were saved. Only the monastery's shop has burned down," said the official.

The cause of the fire and the damage done by it are being determined.

The second floor of the monastery's shop, which has burned down completely, housed a museum of the history of the tsar's family and Russian Orthodox warriors. The museum contained pictures of the Romanov family, a model of the house where the Romanovs were killed, icons, books, and old military uniforms.

The Yekaterinburg diocese has made no comment on the incident.

In 1991, the remains of the tsar family were found in Ganina Yama near Yekaterinburg. On July 17, 1998, the remains were buried in the imperial tomb in the Petropavlovskaya Fortress in St. Petersburg.

Genetic tests performed on the remains in 1998 confirmed that the remains are those of Nicholas II and his family.

A monastery in honor of the tsar family, who have been recognized as martyrs, was built in Ganina Yama. 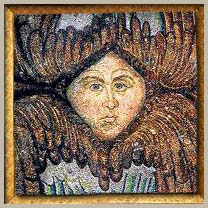